Despite rumors to the contrary, gospel singer Frank Ugochukwu Edwards has come out to set the record straight once and for all. The young Gospel bachelor open about the relation and insisted that the proposal never happen.

On Sunday, the eldest daughter of Pastor Paul Enenche of the Dunamis International Gospel Center, DIGC, sparked engagement rumors when she shared a picture of her stunning engagement ring on her Facebook and Instagram profiles with no additional context.

Debbie, as she is commonly known, has stayed mum despite mounting pressure from her fanbase for her to elaborate on the photo.

Speculation that the singers, herself and Frank Edward, are engaged has led to the circulation of a still photo of the two of them. 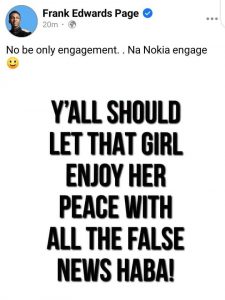 But Frank Edward took to his social media handles on Thursday to debunk the rumour, asking his followers to disregard the fake news.

He said “you all should allow that girl to enjoy her peace with all these fake news”.